MY SHOT ON THE BIKE 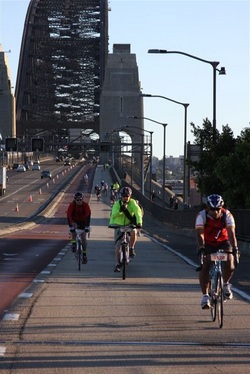 The Roads and Traffic Authority of NSW holds an annual 50km ride called the Spring Cycle. This ride is a charity ride which supports Multiple Sclorosis (MS). It's a fun day out for the whole family. I have done 2 of these already and am planning to do the next one in 2011. A photographer just happened to take my picture when I was looking through the website, so I bought the picture. Here it is. That's me in the front, we just crossed the Sydney Harbour Bridge. I have also completed the 2008 ride. Am looking to register this year for the ride on Sunday 16th October 2011. 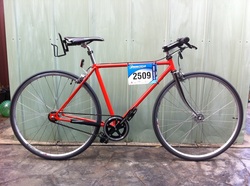 The spring cycle is coming up in a week and the bike is ready to roll. Since it has been built it has been completely pulled apart once, had a couple of spills on the street, so it's got a few battle scars, had it's handlebars off a few times, had a 17T fixed gear cog installed, had it's brake cables re-installed, and has two new retro cateye (large) reflectors installed. This bike will possibly be converted to a fixed gear ride after the spring cycle as I will continue exercising and training until the end of the year. For now, it is still in single speed mode.

I built this bike after the 2011 Spring Cycle, I completed the whole course in one gear. In previous years I had to change gears all the time due to my fitness. So this year will be the test. This is why the bike came into being! Really looking forward to the 50km ride through our beautiful city of Sydney. We'll be heading over the Harbour Bridge, Anzac Bridge and cycling through some iconic areas of Sydney. The course will finish at Homebush in Olympic Park. I will then be cycling the extra 20km home from the finishing line. Luckily there are dedicated bike paths for the way home.

This was the fastest Spring Cycle I had ever done. The bike was flawless. I started at 7am on the dot and completed the 50km run from St Leonards to Homebush at 9:25am in 2.5 hours. Then cycled home which was another 20km. So all up I did 70km. I could feel my left leg starting to cramp. The same leg that gave me probs at the Tour de Hills earlier this year. I was about 1km away from my home, so I got off and walked the last hill before continuing home riding on the flats. Don't think I had enough salt left in my body. I was eating right throughout the ride and also drinking plenty of water. I should have bought some powerade or an electrolyte drink. Overall I am very happy with the bike. During the ride I constantly saw peoiple clicking in and out of their clipless pedals everytime we came to a traffic light or stop sign. Also I didn't see any other single speed or fixed gear bikes around, apart from a guy on a unicycle with a 27" wheel! Whenever we approached a hill, alot of the people on geared road bikes or racers were changing gears and slowing down and peddaling fast up the hill, then changing gear again a couple of times to go faster when everything levelled out. The reason I could see all this around me was I did not have the same hassles as they did. Riding a single speed allows you to appreciate your surroundings more. If I came to a hill I just tried my best not to get out of the saddle and if I had to, then I'd just stand up and climb. No noisy gear changing, clicking of pedals or worrying about my chain coming off. The road  mountain bike riders were just slowing me down whenever a hill aproached, so I just went around them, and fast! I did fewer pedal strokes and gut up hills faster and wasn't as timed either. This just goes to show that single speed make you fitter for sure. I don't know why more people don't use single speeds. I'll certainly be using one for my next Spring Cycle in 2013 for sure. May even use the old Raleigh Twenty if it is ready by then. 20" wheels on a 1973 bike for a 50km ride? Bring it on!