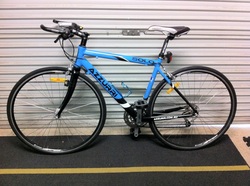 In Feb 2011 I started a new job which was closer to home. So the car has had a break and I have been taking the bus. It's only a 20 minute bus ride each way. So I got myself an iphone as my previous Nokia was playing up (as they always eventually do!) The iphone has been great, emails, web, youtube and now I have recently discovered through a mate of mine, how to watch movies. Thx Andrew! So the bus trips aren't quite so boring afterall.

Then I realised, I have a perfectly good bike sitting in the garage which can fill my fitness needs, but could also be used for the commute to work. So I had a look at it and it really looked like it needed a service. So I took it to the bike shop and they gave it the once over. They told me that the bike was in really good condition (prolly due to me not riding it as much) but the chain, sprockets and all the running gear were looking pretty grotty and also was starting to show some signs of surface rust forming. So I put it in for a service with them. They took everything off, cleaned, lubed, oiled and tightned & adjusted everything and put it back on.

When I went to drop it off, I noticed that another customer had bought a new mountain bike which was getting worked on in the workshop. The handlebar and shifters were coming off in favor of carbon ones with all new shifters and brake levers. After chatting to the mechanic about my commute to work we bot agreed flatties would be better and safer. So he agreed to switch my drop bars to those flat ones that were coming off the other bike for me for an extra $50. It was all brand new parts afterall and I got a great deal.

Even though hybrid bikes are available as a complete package these days, the bike mechanic mentioned that it was better to convert a dedicated road bike to a hybrid, rather than buy a dedicated hybrid bike. Road bikes are generally lighter and faster, plus the rider positioning is slightly more aerodynamic than a dedicated hybrid bike. The current hybrids for sale in shops are designed and built specifically as hybrids. They can take slightly wider tyres, and the positioning of the rider is slightly more upright than my setup, plus there are a few minor changes to the frame for these bikes. To be honest, I think it would just be better to get a lightweight mountain bike with shocks and add some smoother tyres. I will only be cycling on roads and dedicated cycleways to and from work. So the speed, weight, size and handling of my bike is now perfect for my specific needs.

Now I have the speed of a road bike combined with the control & ride comfort of a mountain bike. 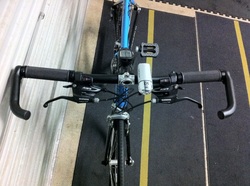 The only part of the old drop bars that I used while riding were the tops, which I felt weren't wide enough (yes I know it's a road bike and that's how it is supposed to be, but I don't care!) and I really liked resting on the brake hoods which were great for when I was climbing/standing going up hills. So I was happy to get the bars and shifters swapped for mountain bike style controls. This setup is now about 14cm wider that before but it rides fine for me. I may look at attacking the bar ends with a hacksaw at a later date to shorten either side a little but for now it will do fine. 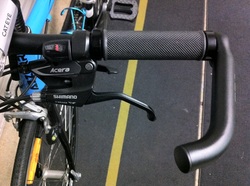 Close up of the new setup. Generic brand flat handlebar, Shimano Acera 8 speed v-brake shifters with new cables, new lock-on handlebar grips (these lock on with a tightening screw instead of just slipping them on), Pro bar end grips for climbing and comfortable cruising. Have re-attached my light and wireless computer. The bike also looks alot more aggressive now. I still have the old handle bars and shifters if I ever want to change it back but don't really see that happening. I'll probably ebay them. 8 speed Sora shifters are still worth something. They are not made anymore and are still in high demand with lots of roadies. 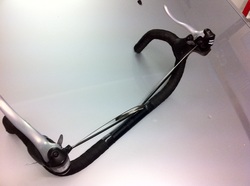 Previous setup which included Shimano Sora 8 speed Flight Deck Triple shifters which doubled as the brake levers too. These work really well and have smooth gear changes. I don't see these going back onto the bike anytime soon, but will keep them around for awhile before deciding to sell them.

Update 4/1/2012: They are on ebay for sale as we speak. I have decided they are taking up space. Thought about using the drop bars for the Repco project but prefer flat bars. Someone is going to score a nice setup here.
Update 12/1/2012: Sold for $91.00 to the lucky winner!!!