Located in the scenic north western Hills District, this classic bike ride has long been part of the calendar for the recreational cycling fraternity.

Now in its 17th year, the Tour de Hills is organised by Rotary Castle Hill and now starts and finishes at Rouse Hill Town Centre. Entrants will have the choice of four routes to ride - 100km, 60km, 30km and the new family friendly 13km cycleway stage. Lunch and a drink will be provided free of charge to all entrants at the end of the ride. This year tax deductable donations and sponsorships are being accepted for Hear the Children, an Early Intervention Centre that gives hearing impaired babies and children the gift of speech.

The Tour de Hills was born in 1995, when the Rotary Club of Castle Hill decided to introduce an additional fundraising project into their annual calendar of events, in order to supplement those that already existed. In March 1996, after many months of meticulous research, planning and negotiating, the first Tour de Hills Bicycle Classic took place. The ride encompassed two stages - 20km and 70km - and attracted 434 riders.

The principle purpose of the Tour de Hills was, and remains to this day, to provide funding to children's charities. Indeed the first Tour de Hills ride raised over $15,000 which was donated to the The Rotary Wing of The Childrens Hospital at Westmead.

Over the past 15 years, the Tour de Hills has raised over $550,000, which has benefitted many charities including The Australian Cord Blood Bank , Canteen, Kemo Care for Kids, St.Gabriels School for Hearing Impaired Children and, of course, Hear The Children Early Intervention Centre.

As the ride became increasingly popular additional distances were added and in recent years 100km, 70km, 35km and 20km stages have been available for riders.

The Rotary Club of Castle Hill are proud to introduce Rouse Hill Town Centre as the brand new naming rights sponsor for the 2011 Tour de Hills Bicycle Classic. This exciting new partnership and will provide the perfect platform for the event to expand to new heights and gain even more exposure moving forward - giving the Tour de Hills an even greater opportunity to raise funds for the charities it supports, including its principal recipient Hear the Children Early Intervention Centre.

Preparation:
Have been cycling on and off leading up to this ride for the last couple of months. Did some rides to work and also on weekends and weeknights. Got on the exercise bike a few times and also the treadmill. This was probably the fittest I had been for a cycling event.

Saturday 6am - Did a final cycle and also a run with Viju on Saturday morning (was hard because I don't normally run at all!). Then did not do anything for the rest of the day. Ate a big bowl of pasta in the evening for some carbs. Serviced and prepped my road bike, checked all the gears, tyres, brake pads and tightened everything. Form what i had read on the web, some of the roads were real rough.

Ride Day:
Sunday 5am - ate ate a large jam sandwich. Stretched, got onto the exercise bike for about 5 minutes to warm up. Made up some Powerade (powdered) and made it extra sweet. Also filled up my hydration backpack with 2L of water. Took 3 energy bars. Cycled to the event at Rouse Hill with was about 10km away to warm up sommore.

I was in the 100km group and arrived early, ticked my name off, got my number pinned on for me and got ready at the starting line for 7:30am. I was in the first group of 50 that started.   The start was easy as all the roads are real nice around Rouse Hill Town Centre. Then we hit Glenhaven road which was bumpy at times, flat, hilly etc. It had everything that challenged me and my bike. The last part of the road was particularly hilly and I was in such an easy gear that I hung onto the closest bike I could find and stuck to him like glue. Most of the course was ok and there were alot of bends which we could go at almost full speed. I managed to get up to 56km/h and my average speed for the day was around 21km/h. Saw some photographers taking pictures along the way too.

Did the first 50kms no probs. Glenhaven road was a bitch (hilly), but I found Annangrove Road even worse, not because it was hilly but because the bitumen was made up of tar and large rocks. Bike was vibrating the whole way. At this point I was really wishing for front shocks (like on a mtb) but I was glad I wore my old padded gloves. But after the ride they were ripped up to crap and had large holes in them, so I have chucked them in the bin now. The bumps were so bad that everythime I hit a smooth bit of road I felt like I was almost flying. Was such luxury! Normal road never felt sooo good!

This is where things started to get downhill though. Once I got to the 62km mark  and on my second loop, mark my legs started giving up, I kept getting really bad cramps in both my thighs everytime I attempted a steep climb. So I had to pull over to the side, sit and stretch for about 3-4 minutes before getting on again. Alot of riders were asking me if I was ok and if I needed any help. There seems to be some sort of subculture with bike riders, particularly in events where they look out for each other. Was good to see. You even see it in the Tour de France where some riders just give up, and other stop too and encourage them to get back on, even slowing down for riders that had fallen behind. I ended up pulling over about 3 times.

I had gotten to an intersection at Dural where the marshals were holding three signs pointing in different directions. 50km route, 60km route and 30km route. I decided to ditch the 50km route and use the 30km one to get back. This way I would have completed 80km's instead of my initial planned 100km. The marshal a that check point said that i wasn't the only one and hundreds of other riders did the same. Things were starting to take it's toll on my body particularly my legs, and I knew the 30km route wouldn't be as hilly and with only some very slight inclines. This is the route alot of parents and kids take for an easier ride. I needed to rest my legs a bit so I thought this would be the best option to finish up with.

On my third time that I pulled over due to cramping, the Rural Fire Service spotted me and pulled over to check if I was ok. The fire trucks were driving around just to make sure people were ok and provided lifts and first aid if needed. Two men got out and I had a chat to them. Told them I had cramps and that I was going to wait for a couple more minutes before heading off again. They advised that their station/drink stop was only around the corner from where I was. So they loaded up my bike onto the truck and I got in the cab with them. They drove me to the stop where I had a couple of drinks of lime cordial, a snack and I took a break for about 10 minutes stretching and walking around a bit and also sat under the shade for awhile. had a chat to the guys there, friendly bunch. Then when I felt rested and ok, I thanked them and set off again. At this point I had covered a total of 77.4km of the course and it was only 2.6kms to the finish.

I got on my bike and set off, was a slight incline on the road that I was on but it was a straight and easy road. I rode for about 30 seconds and even though my legs had stopped cramping, my left upper inner leg (groin area) had had enough and I felt something pull suddenly. As a result my left leg just stopped working and refused to let me pedal a stroke. This was when I decided enough was enough. I still had the determination and even though my lower back, legs, hands and feet were aching, I had passed through the pain barrier and was willing to complete the course. Still, my body was telling me that it wasn't physically possible anymore. Had my legs not given up I would have completed the 80kms. I was unable to ride anymore. So I stopped, waved down the Rouse Hill Community bus, loaded up my bike and got on. Sat in the nice air-conditioning for the remaining 2.6kms to the finish line.

When I arrived back, I was given lunch which was pasta, salad and a bread roll. Was also given a bottle of water. By this stage I had finished my powerade and also most of my 2L of water. I also ate another energy bar for desert! The town centre was very crowded so i walked my bike over across the road to the cemetary, found a shady spot and lied down to have a rest. Called my wife and she came and picked me up in about 15 minutes. Went home, had a shower and then moved around very slowly for the rest of the day! Slept like a baby overnight too!

So to sum up, I originally intended to do 100km, then switched to 80km, and completed 77.4km before stopping due to injury. Still I am happy with the result and to date it is the longest distance I have ever ridden in one go. I will now spend time recovering and do not want to look at another bicycle for a week!

I have posted a couple of photos I took at the finish of the event and also of the map that I got from my iphone of the route that we took. 100km is two laps of the highlighted area. I did about one and a half. Hopefully the Tour de Hills site will be updated soon with photos of the event so I will post those photos soon.
Website is: www.tourdehills.com.au 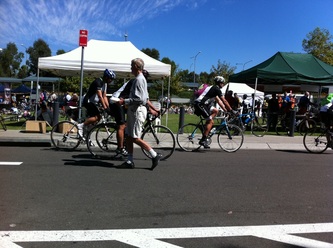 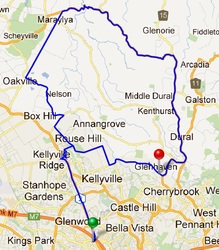 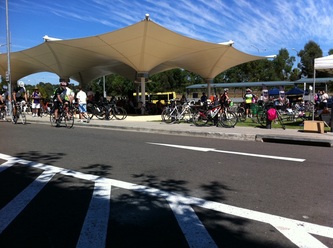 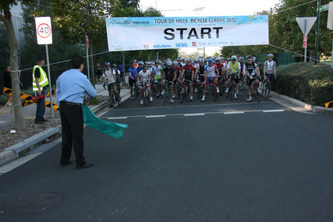 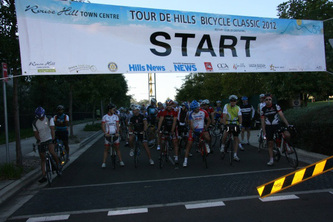 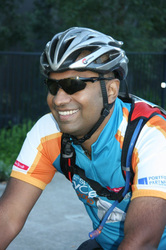 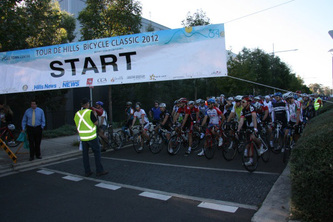 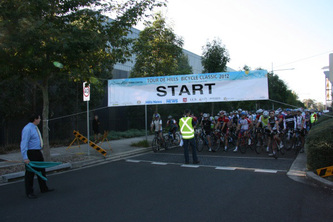 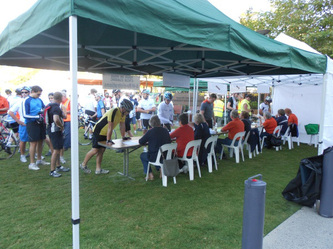