So how do I get the bikes to go places that are too far to cycle to? With a roof top bike carrier of course! 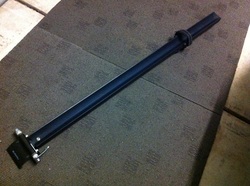 This is a good solid carrier and holds the bike well. No drilling into the roof racks to hold it in place. Also it is secured by allen bolts. So a bit troublesome for the would-be thief to remove. It is Subaru branded but seems to fit Rola racks so I'm assuming it is originally Rola. Fits to our Subaru Forester factory oval racks and also, luckily, fitted to the rola sports racks on the other car. The bike is mounted to a quick release axle using the front fork, and the rear wheel is secured by a velcro strap. Very effective. I have sold it now, on ebay of course! Got rid of it because my road bike has a front axle that is held on by 15mm bolts on either side. Good for parking and not worrying about your front or rear wheels being stolen. The downside is that I have to use a 15mm wrench to remove the wheel. My mountain bike does have a quick release so it is abit easier, but then again it has disc brakes. When the front wheel is removed, it means the brake pads have no disc in between them. As they are hydraulically operated, if the brake lever is pressed by accident while the wheel is not in, then I won't be able to get the wheel back on. It will also be a pain to separate the pads again, and I may do damage to the pads while trying to pry them apart. Got fed up of removing the wheel.

This is what I now have. Well not yet. Paid a holding deposit and will be picking it up next week. Bought an ex shop display discontinued model. Cost me $120 (normally $185). Didn't come with the box or manual. What it did come with was a couple of years worth of dust and some minor superficial scratches. Still was a good deal! With this rack I can leave the front wheel mounted to the bikes and it adjusts to carry any bike from a 20" wheeled bike right through to a 29er (29" wheeled) mountain bike. Also comes with locks to lock the carrier to the roof racks themselves and another cable lock with a lock barrel to lock the bike to the carrier. Both locks use the same key barrels (3 keys supplied). No more fiddling with the front wheel! Bike is secured by the front wheel clamps and the rear wheel has a ratcheting tie down. Quick to put on the car and quick to take off.

Best part about this rack is that it is universal, so it will fit any type of roof bars. So if I ever change the car or racks, it will still fit anything. Brilliant! I'd never heard of Yakima in the past, but I certainly have now!

Picked it up today. Went up to the car park on my break and mounted it to the car. Took a bit of fiddling to get the positioning right but it is now on the car and is rock solid. This photo shows what it looks like when mounted to the car. It is alot bulkier than my previous carrier, and heavier too, but I think it looks fine. As long as I don't have to take my front wheel off, that is the most important!. Also it is currently locked to my roof bars and there is a cable lock attached to it for when the bike is on there. The three keys supplied fit both locks.

Soon as I got home I couldn't wait to try it out with the bikes. Both fit well and they are solid and do not move at all when on the car.

I suppose I could have got a more streamlined carrier from Rola or Thule but those carriers required specific mounting for specific bars. Also adapters would have needed to be purchased. This thing is an all in one unit that will fit any car. I'll be keeping this one for life! 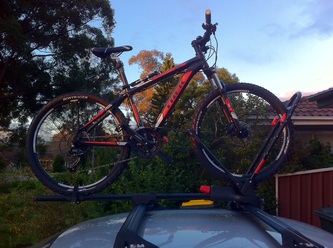 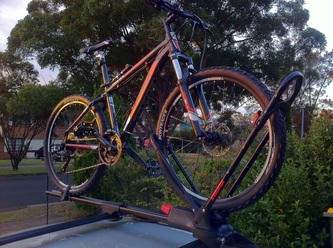 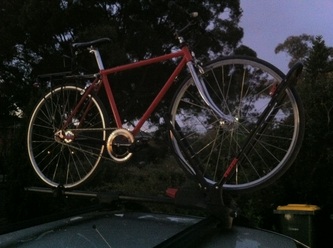 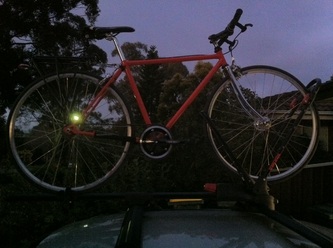 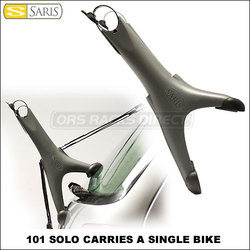 Bought this cheap rack as a replacement for my Yakima front loader. It is no match to the front loader but it was cheap and strong. I was given a hatchback as a work car and this worked fine. Although the bike still hits the rear of the car when it swings etc. Also it will not work with sedans. Another limitation is that it can probably only carry lightweight road bikes. Mountain bikes are possible but would be stretching its weight limits. So naturally I got rid of this and have just bought the carrier below. 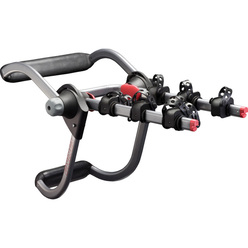 Yes I am now a Yakima fan. Their products are awesome and bulletproof, I reckon they're even better than Thule! I have sold my beloved Yakima front loader rack and replaced it with this. Reason being is because my car was written off in an accident. I also started a new job that provided me with a company car. As we change our cars every couple of years, I wanted a rack that was universal and could fit any car. I did have the Saris Solo rack before this as I was given a hatchback at the beginning. Now I have been given a sedan with a boot/trunk. The SARIS rack still fits but the bike hangs  way too close to the car and could damage the paintwork when it swings in transit etc. So I have sold it and bought this  one second hand. Can carry three bikes, has anti-sway fixtures, and best of all it fits on any car! The only kind of car it  may struggle with a bit would be a station wagon that has a top spoiler, but will fit over all other cars with spoilers. It is  held on by 6 straps and two huge padded bars for support and protection of the vehicle. It is still sitting in my boot and I  have not mounted it yet. May have a play at lunchtime.

For a long time I have had an old shed that leaked water. I stored a couple of bikes in there, mainly the kids bikes, scooters and my wife's bike. Mine were kept in the garage which is now gone. We have recently had a larger new shed installed. I worked out the best way to hang my bikes up so that they would take up less space in there. I also wanted to do it without putting any holes in the shed. So I used a series of off cuts from out recent renovation along with a steel bar. Got some shed hooks and wrapped them up a bit to protect the wheel rims when hanging. Took me a few hours and the end result looks a bit messy but it is rock solid and I could do chin ups on it. So I didn't doubt that they would be able to hold up the bikes. See pics below. 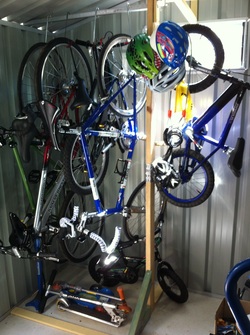 The materials used to build up the rack consisted of a steel bar, some shed hooks, some red grip tape wrap, a few bits of timber off cuts used to build our roof trusses and walls, spare roof truss brackets which were hammered into place, some screws. Spare bike hanger hook which is screwed into the wood and a couple of spirit levels.

A round steel bar would have been better but I had this lying around. Originally bought to fit the handle of a 12" adjustable wrench into one end so that I could have more leverage when trying to remove a rusted and seized tow ball from my wife's car. It did a great job but that has been sorted out now so the bar was doing nothing.

Once the rack was ready the remaining bits of wood had to be placed at all and sides of the main beam to ensure it was vetrical as well as making sure it wouldn't fall over. Everything here in this setup has no holes drilled into the shed. Just braced against the top of the window frame and both top ends of the shed where the steel bar and wood rests.

This leaves the bottom space free for the kids scooters, my repair stand and also for my tools.

What you see here is:

My Brown Jersey Single Speed, My Wifes Malvern Star Mountain Bike, My new Gios Antico Mini Velo, Our Kids Pacific Trailer Bike, Sam's blue Repco 16" bike, Dan's 12" Giant bike, as well as their Razor scooters and my Serfas floor pump. The Brompton is kept inside the house at all times!  Oh and the helmets of course! 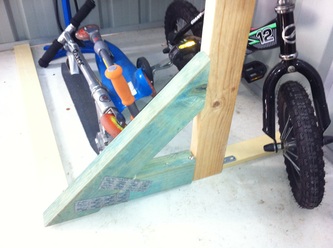 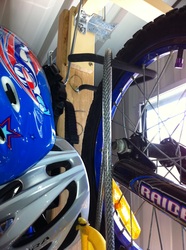 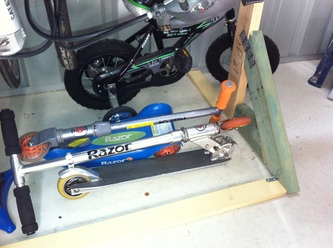 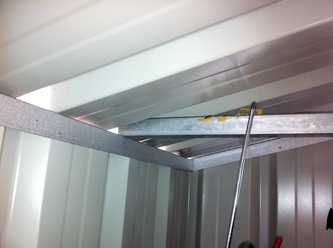 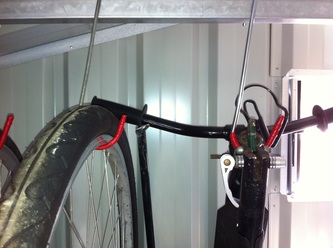 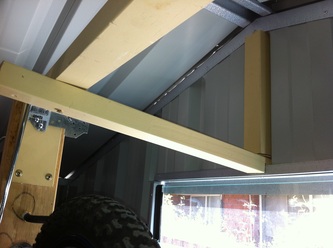 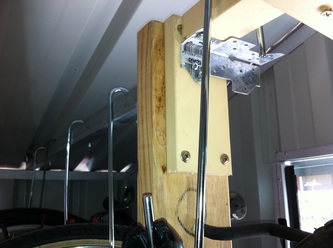 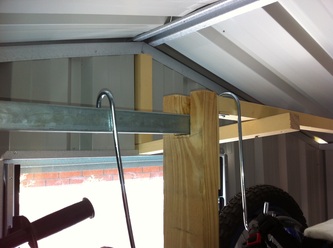 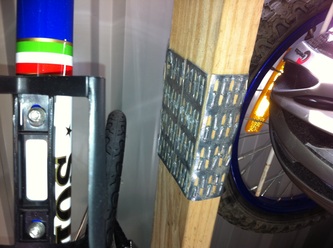