This is the car that I drive everyday. It's a Subaru. Used to be my wife's car as I drove a Mazda 6 hatch for a couple of years. She recently bought a brand new XV so I have taken over her old car. At first I was a little apprehensive as I hardly drove the car when it was hers. I found it too big, long and it was heavy on the accelerator. Plus it was a 3.0L 6 cylinder. I'm used to smaller 4 cyl cars. In about a month I got used to it, and also got used to the power. We originally bought this car as we wanted to be able to do some family trips away so this was a bit of a tourer. It's our regular vehicle of choice for when we go camping, road trips, interstate travel. It does suck a fair bit of fuel as I am lucky to get about 420 kms out of one full tank. Still it is a safe car and has kept us out of harms way more than a few times, it has had a few knocks but nothing major. The car also has some slight hail damage which I am not really worried about. hardly noticeable.

This page will be focusing on the updates that I have made to the car since it has been in my possession. My plans are to prep this car even more in order to take it off the beaten track more. Below you will find all the work I have done to date to turn this into an urban/off road weapon! 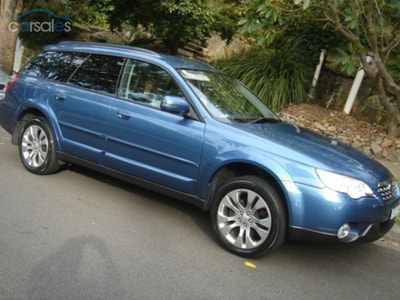 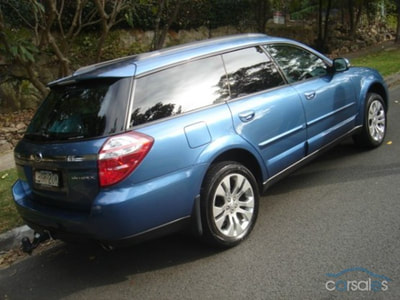 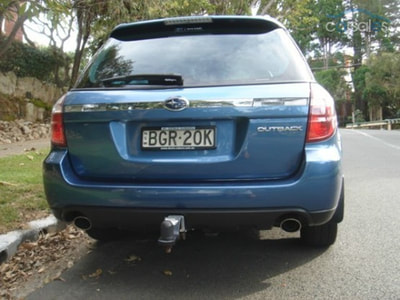 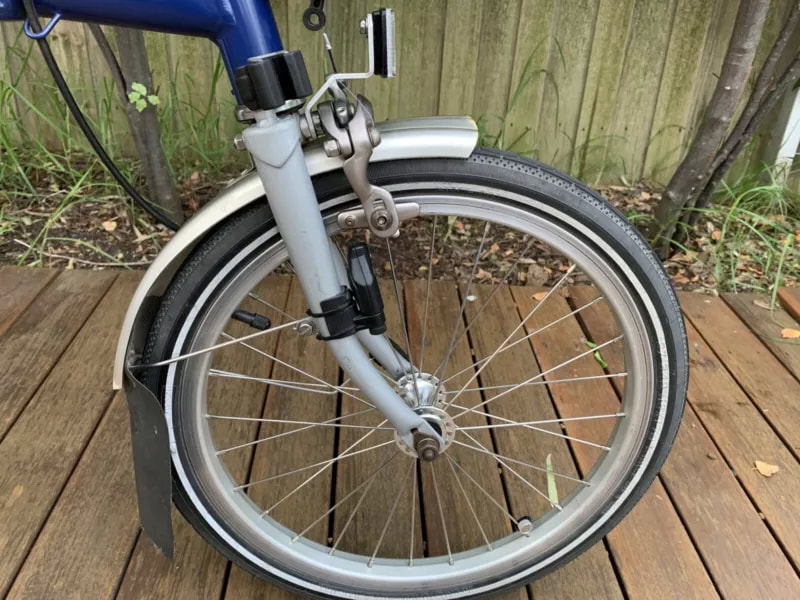 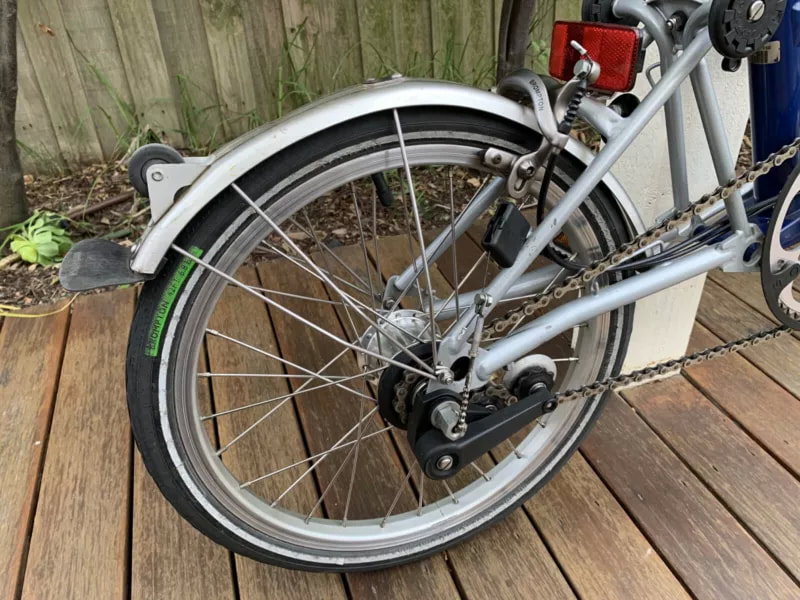 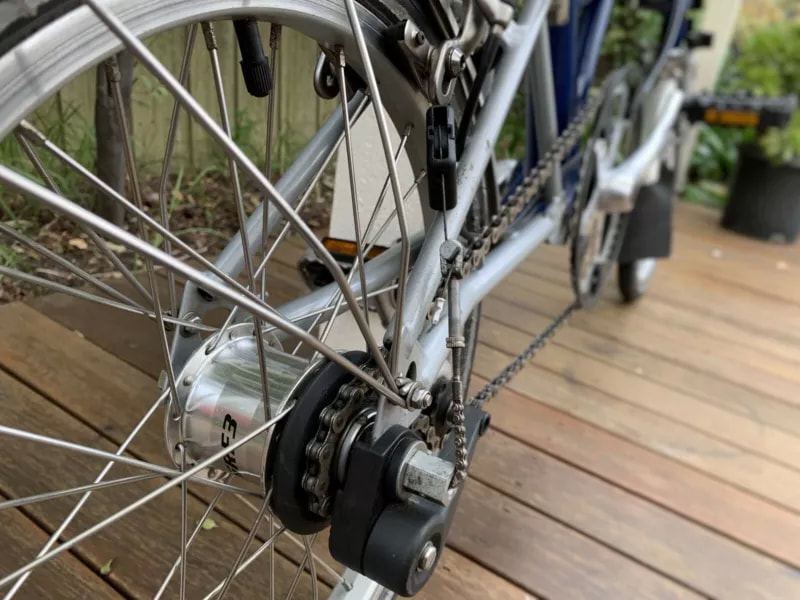 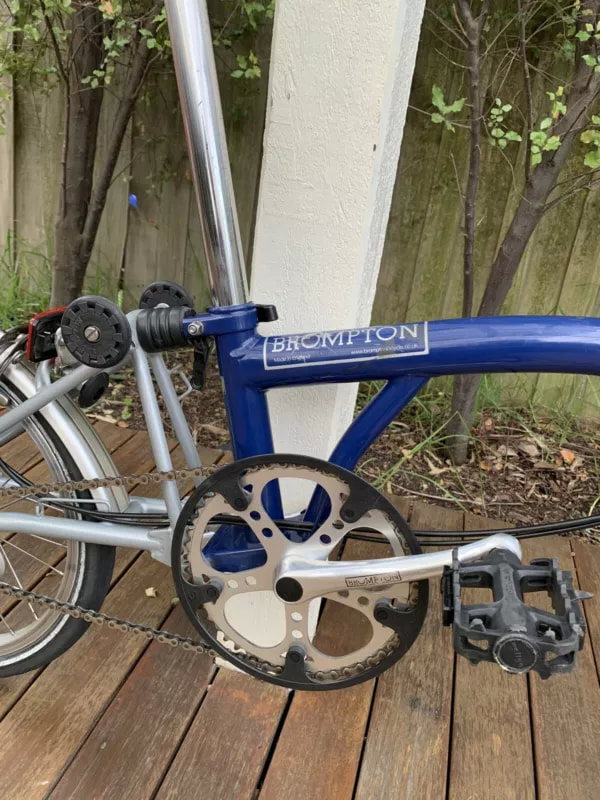 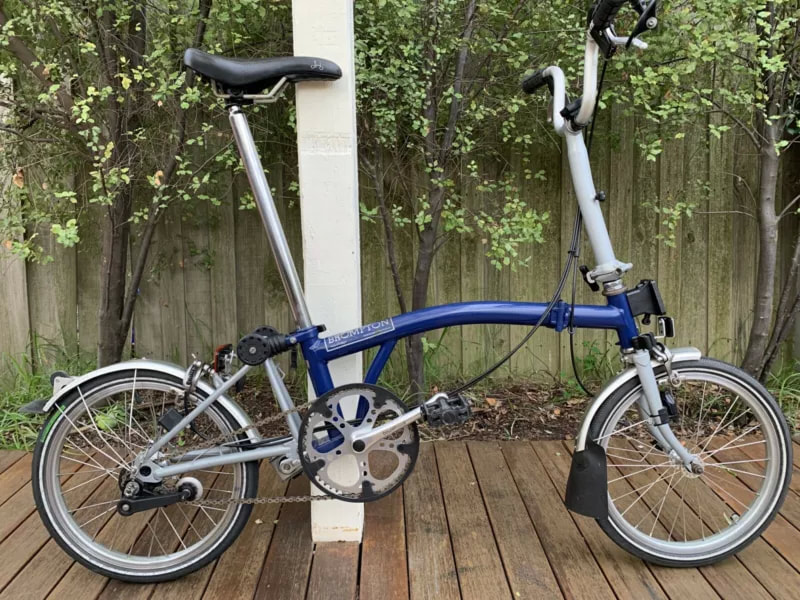 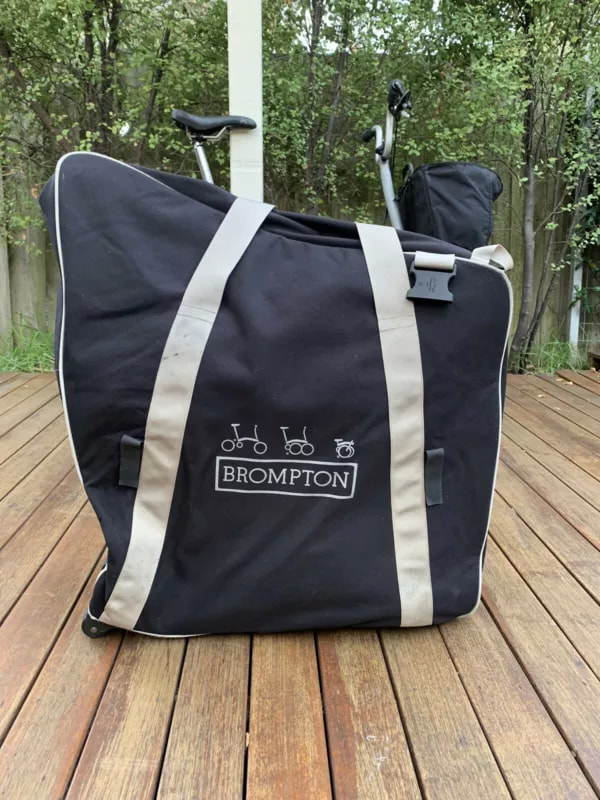 Way back in 2009 my wife ordered a company car through her work on lease. It was a brand new 2009 Subaru Outback Premium 2.5i. The car was black with every single option you could think of apart from a GPS navigation system. It had a massive sunroof, black leather interior, rear cargo mat and interior mats...everything! Then after a couple of years we decided that it was not worth buying the car outright so she returned it. We had been looking for an outback ever since to buy as a personal car but did not think we would be able to afford it at the time. They were selling for upwards of $45,000! So we bought a 2005 Forester and was happy with that car. Same engine and lighter, so faster. Then it got written off in a flood. So we decided to look for a used Outback in the classifieds. They were a little more in out price range now. Test drove quite a few and in the end we settled on this one.

When new the car was a Subaru directors car. It was a 3.0R but not a premium luxury version. So it had everything except for a sunroof, aux connectivity, reversing sensors and no cargo mat. No biggie. It also had a tow package installed which gave the car self levelling rear suspension and some stiffer springs as well as all the electrics/plugs for towing. The it was sold to the guy we bought it from and his wife drove it just to go to the shops. She was a bad parker and scraped up the left wheel on the kerb. Car also had a scrape on the bottom front bumper, smashed right drivers mirror indicator and lots of tiny dings on the passenger side on the front drivers door where it had been knocked in car parks. But overall it was a good car and we bought it for half of what the new price was, and as you can see on the odometer it only had just under 29,000 kms on the clock!

Over time all the dings were fixed and I eventually sourced a replacement mirror from a wrecker. Now it's got hail damage. Who cares! No more bodywork! 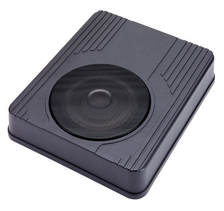 First thing I do when I take over a car is to make sure ​the sound system is right! One thing this car didn't have as an option   was the very expensive McKintosh audio system. Instead it had the standard Kenwood/Panasonic system. Still it wasn't
that bad but there was a huge lack of bass. So I sourced a genuine Subaru Legacy low profile sub woofer and installed it
under the passenger seat. It also came with a wiring harness so it was super simple to put in. The overall result was a
vast improvement as the car already had tweeters in the doors so it all works great. 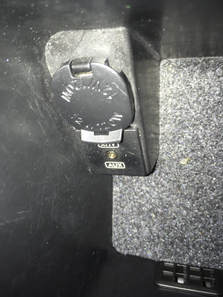 Next to go in was an aux input kit. Again this was plug and play. I wanted to be able to play music from my phone or plug
an mp3 player in. So this unit again was genuine Subaru and was ordered through MRT performance in Sydney. Another improvement which makes a lot of difference. 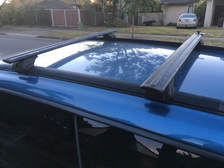 Next on the list was some roof racks. Found some used roof racks online and bought them. I actually have two sets of these
in case I ever need to mount more bars. I also have a roof box which I use with the car and bought some new clamps. 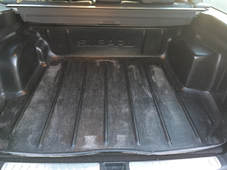 Bought this from a guy at the Northern Beaches. His car was written off in an accident but he kept the cargo protector
because he knew they were a rare option. Basically I am able to carry messy/wet stuff if I need to and it will not stain
the carpet underneath. Easily removed if needed. 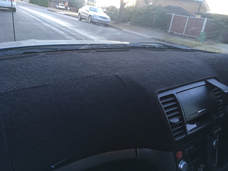 I ordered this dash mat from ebay as the Subaru Outback/Liberty/Legacy of this make has a problem with dashboards
That melt! They get really sticky overtime and then start to crack really bad. Dust was sticking to it really bad and I just could
not clean it off. So I bought the mat. The dash has since been replaced by Subaru under warranty so I have put the mat
​ right back on and keeping it covered from new! 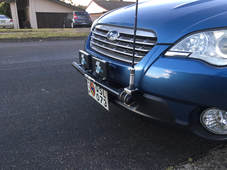 Here is Oz it is super expensive to have a nudge bar on your car. Especially if it for this car. I was looking at upwards of
$600 for a small bar with two light mounts! So I found this company in the USA called SSD which supplied me with a
front bar that mounts to the bumper mount internally (front bumper had to be removed), and is super strong. It also gave me
​ 4 light mounts. It is so strong I can stand on it. It also gave me a number plate relocation plate in the kit. 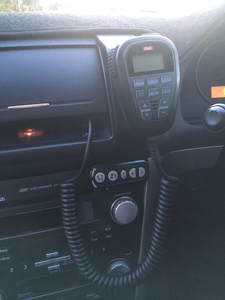 I wanted a UHF that took up the least amount of space possible. So I sourced this GME unit which has everything in the
handset, including a rear speaker. The main unit is hidden under my seat. That has a speaker also. I used the mic
extension supplier to wire it behind the dash and through a hole in the top compartment between the air vents. This way the
mic plugs into a small connection in there and I can easily disconnect it if needed. I also installed a clip on mount to the dash
which required no holes being drilled anything cut. I then screwed in the microphone hanger to that. It is positioned
perfectly for me and at easy reach. If I need to remove the mic I just unplug it from the connection and hide it away. 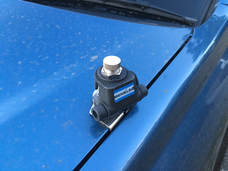 I added this mount as I have an ATAS AT-120 antenna that I use with my portable HF receiver. The antenna is an automatic
tuning antenna which raises and lowers itself and is quite heavy. This mount will be used when I head off the beaten track
​ and playing with amateur radio. It's all wired up ready to go and has a dust cap on it. 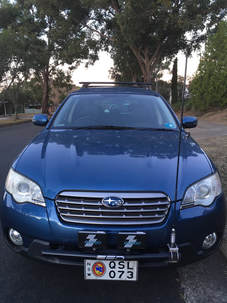 These front fog lights are from a Mazda Bongo. I bought them from Gumtree new in the box. Just an unused Mazda
part. My original intention was to install them onto the light bar but in the end I mounted them to the licence plate mounts.
They are very thin and light so was an easy job and they do not move or bounce around. They have the covers on them
that say 'Bongo'. I am going to eventually wire up the lights and also paint the front of the covers flat black and put a
couple of Subaru stickers on each of them. I found some nice STi ones online that are reflective. 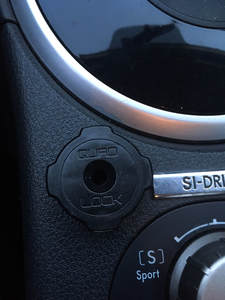 I bought a quad lock holder for the car as I already have one on my bike so it made sense to be able to mount my
iPhone SE steadily in the car too. I hate all those car window suction mount thingys. They are always flimsy and fall off.
​ This one is steady and rock solid. Just stuck on with double sided tape. Twist and lock, nice! 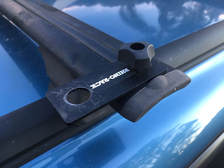 A mount originally used for an antenna but I ended up leaving it there on the racks once I removed the antenna. My
intention is to use it for mounting some sort of reversing light or moveable work light. Mainly for when we go camping.
Backing up a car in the dark at a camp site can be abit dangerous. You don't really want to run over your own campsite! Plus
​ it  will be handy if we are trying to find things in the dark. 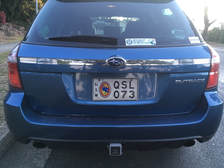 This is by far the biggest score I have ever had when buying something for a car! I just couldn't believe my luck when a
mate told me about these. I have been getting into HAM radio recently and it is a dying breed. A lot of amateur radio operators
​ from the 40's, 50's and 60's etc are getting old and there are a lot of deceased estate sales happening. I am a member of
Amateur Radio NSW as well as my local radio club. These licence plates were a gift in 1987 from a son to a father. They are
a custom licence plate with specific numbers and lettering. For those of you in the know, or if you are in the amateur radio
game, you'll know that QSL is the international ham radio call for acknowledgement of one operator to another. 73 means
Best Regards' when signing off. This is awesome enough but I was more excited about the plates. These Bicentennial plates
​ were only issued by the Roads and Traffic Authority in 1987 for a year. Also when we first arrived in Australia, we were picked
up by some good family friends in their huge Ford Falcon 500 sedan and that car had these plates on it. Ever since then I
have had a soft spot for these plates and never thought I would ever get a chance to own some of my own. These days you can only pass them onto a family member and they can use them too. Otherwise you have to pay an annual fee of $110 per year.  I was prepared to do that but when they entered my details in the system it had a glitch and did not show the fee. So they left it as is. So I do not have to pay an annual fee! Best part is that I got the plates I have been wanting since 1988 and also as a bonus it has unique numbering/lettering on them. This will be an investment for the future. So happy with my score! 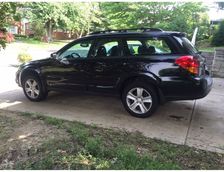 Yes I know this is not a picture of my car. But this car has a 1" lift kit installed which is what I will be getting MRT to do for me
​ in a few months time.